Menu Search
Cart
You have no items in your shopping cart. 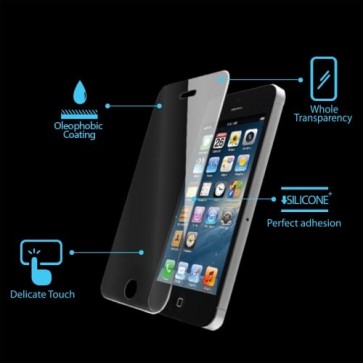 Made of real glass with 8H rating.  Delicate touch feels like the original glass of the phone.  All corners are rounded.

GLAS.tR for iPhone 5/5s/5c is made to protect the LCD from damage and scratches with specially processed transparent glass that has been reinforced to increase shock absorbency. The R in GLAS.tR stands for the rounded edges of the screen protector. Being made of glass, the edges of the screen protector are the most vulnerable to chipping. The rounded edges help to deflect shock from bumps and drops. The glass has been designed to be 28% slimmer and still maintain its high level of surface hardness of 8~9H. When installed, there are no gaps between the LCD and the GLAS.tR SLIM which means the touch screen's sensitivity is unaffected. To prevent any excess force from coming in contact with the edges of the screen protector we highly recommend that a case is used with the GLAS.tR SLIM.

*When removing for re-use, the adhesive properties might wear off to an extent where the screen protector will not adhere to the device. It is not recommended to reuse the GLAS.tR once it's been applied. *Using excessive force when installing or removing the screen protector may damage the product.

Use spaces to separate tags. Use single quotes (') for phrases.